Argh! what a weekend. I'm just in love with Manchester at the moment. You guys are all amazing.

So obviously the Tory conference is going on now and the banner, the beautiful giant banner, the culmination of all our efforts for the past two months, made its debut this weekend.

First of all it went to Piccadilly Station to welcome the Tory delegates to the city. It was ace: the Open Voice women's choir sang Bread and Roses, an old trade union anthem; someone handed out pig-shaped sweets; a brill lady called Sue dressed as a fat cat and gave out fake fifties with lefty slogans printed on them; and we hung the banner over the balcony to a great cheer from the concourse below. Exciting :)

Here's a pic from Real Media 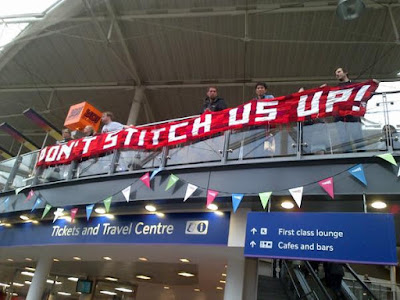 We were supposed to be the signal for the choir to start singing, but I had no idea what my signal was, or where we were supposed to be or anything. Plus I only had Tim with me. The banner is seven metres long. So we set off to Piccadilly Gardens to recruit some of the ravers who'd been up all night to come and hold it with us. In the event, loads of passersby at the station helped out too - no one likes the Tories here.

PS, re. the rave: the Telegraph or someone was moaning that it was keeping delegates awake all night. well boo hoo, I was kept awake all Saturday night by a police helicopter which I assume was something to do with the conference, we all got problems BUBZ. Anyway they've all been moved on now so the little tories can sleep soundly in their beds, knowing that they've done a great job.

and here's a Real Media video of the event, featuring me with a horrible voice and face.

So there was that. On Sunday was the giant massive march, and my first proper protest march ever, AND the moment of truth for banner-pole-things.

We went into town real early to sit in Sidney St LGBT centre and drink brews and panic quietly. But I needn't have worried: it could NOT have gone better. It was smooth as silk, a lean mean protestin' machine, beautiful. The lefty gods were smiling on us, the sun was shining, and everyone was upbeat and positive. Apart from the over-reported spitting/egg-throwing incidents, which by the way I think were planted, everyone was cool.

This is the BEST picture of the banner in action, taken by Ruth Kerfoot... how amazing does it look! 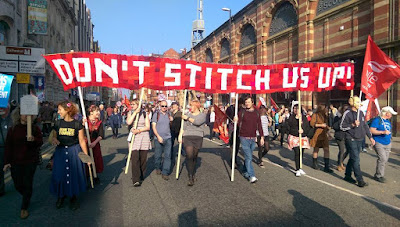 Here's some coverage from the march - obviously there wasn't much, but we DID come in at number 5 of the MEN's top 7 banners, so THAT'S amazing.

If you have any more, please do let me know as I'm collecting them. There are a lot of pics on social media as well which is amazing. I could not have done this project without the help of so many awesome crafters and craftivists and I am so thrilled. I'm taking the banner to the conference tomorrow morning for Cameron's final speech, come along if you can and look out for me :)

It's a shame they had to get all peevish with the whole 'Castlefield Arena is full' nonsense, but it just proves they're scared. If that's what they have to do to stop us congregating, then shit, try harder bozos. 10,000 people turned out last night to hear Jeremy Corbyn, Owen Jones, Natalie Bennett and the rest of them at the cathedral. That is truly something. We are on the rise, don't DARE stitch us up, we're coming for you and some of us got knitting needles.